You are here: Home › Blog › Rome, Italy at night

While in Rome I set out for a late night hike from our hotel Visconti Palace (relatively close to Vatican City) along the Tiber river and across town to the National Monument to Vittorio Emanuele II and then down to the The Colosseum “Flavian Amphitheatre”.  I was hiking light with my small camera bag back pack and my light weight Manfrotto carbon fibre tripod.  Luckily the night sky was very dark and did not show the normal signs of reflected light pollution typical of so many other cities.

While setting up the tripod in front of the National Monument to Vittorio Emanuele II, I noticed several amateur photographers struggling to set up for long exposure pictures with very shaky tripods.   One photographer walked over and struck up a conversation.  He was very interested in my long exposure technique and even more curious about why I was weighing down my tripod with my camera bag dangling from the centre of the tripod (similar to a tripod stone bag).   It was a great teaching moment. 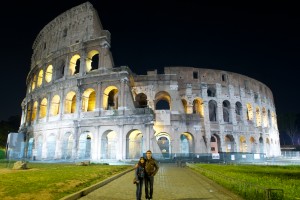 I assumed that late night would be a great time to take picture of the The Colosseum without the numerous pick pockets and wandering tourists. What I found was that after midnight the number of street vendors equalled the number of random tourists and locals walking about. A nice couple from another region of Italy (in Rome on vacation) stopped and chatted with me while I waited for good photo worthy moment. They handed my their pocket camera and asked me take a picture of them. So I agreed and asked if I could also take a picture of them with my camera. 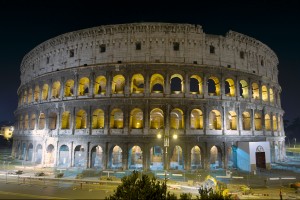 After wishing the couple well, I started to walk down the streets in search of higher ground. That is when I noticed that the group of street vendors had started to follow me and were using laser pointers to point out the location of my camera bag to others (perhaps local criminals looking to snatch up un-attended bags). So I figured it was time to pack up and walk with purpose towards an area that had a better police presence.